Wilhelm II or William II  was the last German Emperor (Kaiser) and King of Prussia, ruling the German Empire and theKingdom of Prussia from 15 June 1888 to 9 November 1918. He was the eldest grandson of the British Queen Victoria and related to many monarchs and princes of Europe.

Crowned in 1888, he dismissed the Chancellor, Otto von Bismarck, in 1890 and launched Germany on a bellicose "New Course" in foreign affairs that culminated in his support for Austria-Hungary in the crisis of July 1914 that led in a matter of days to the First World War. Bombastic and impetuous, he sometimes made tactless pronouncements on sensitive topics without consulting his ministers, culminating in a disastrous Daily Telegraph interview that cost him most of his power in 1908. 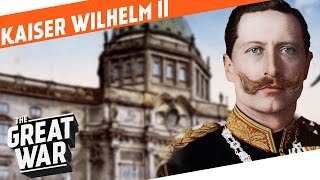 His top generals, Paul von Hindenburg and Erich Ludendorff, dictated policy during the First World War with little regard for the civilian government. An ineffective war leader, he lost the support of the army, abdicated in November 1918, and fled to exile in the Netherlands.

The Prussian Settlement Commission (German: Königlich Preußische Ansiedlungskommission in den Provinzen Westpreußen und Posen; Polish: Królewska Komisja Osadnicza dla Prus Zachodnich i Poznańskiego) was a Prussian government commission that operated between 1886 and 1924, but actively only until 1918. It was set up by the Imperial Government under Otto von Bismarck to encourage emigration and increase land ownership by Germans in the German Empire's eastern provinces of West Prussia and the Posen as part of the government's expanionist and modernising efforts.

Britain calls for international mediation to resolve the worsening crisis. Russia urges German restraint, but the Russians begin partial troop mobilization as a precaution. The Germans then warn Russia on its mobilization and begin to mobilize themselves.

01.08.1914 | Reacting to concentration of Russian Army to its borders, Germany declares war to Russia

04.08.1914 | Britain declared war on Germany after the Germany had invaded Belgium

30.08.1914 | The German army defeated Russian forces at the Battle of Tannenberg

26.10.1918 | WW1. Erich Ludendorff, quartermaster-general of the Imperial German Army, is dismissed by Kaiser Wilhelm II of Germany for refusing to cooperate in peace negotiations

07.11.1918 | A socialist revolution led by Kurt Eisner overthrows the Wittelsbach dynasty in the Kingdom of Bavaria, Germany.

09.11.1918 | Kaiser Wilhelm II of Germany abdicates and Germany is proclaimed a Republic