T. A. Edison presents his phonograph to Scientific American for the 1st time

In July 1877, Thomas Edison was attempting to build a machine that could transcribe telegraph messages by making indentations on paraffin paper when he hypothesized that telephone messages could be recorded the same way. Using a diaphragm with an embossing point that was pressed against moving paper, he found that noise vibrations made indentations in the paper. 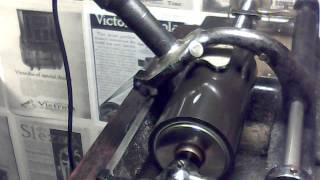 By late November, he had completed a design with tinfoil substituted for the paraffin paper; it “consisted of grooved cylinder mounted on a long shaft with a screw pitch of ten threads per inch and turned by a hand crank,” describes Rutgers University Thomas Edison Papers project.

Edison gave the design to his mechanic, John Kruesi, who built the phonograph within days. In his first test of the phonograph, which likely occurred on Dec. 6, Edison recited the nursery rhyme “Mary Had a Little Lamb” into the mouthpiece as he turned the crank. When he played the recording back, he was astonished to hear his words repeated.

“I was never so taken aback in my life,” he recounted. “I was always afraid of things that worked the first time.”

On Dec. 7, Edison brought the phonograph into the Scientific American offices in New York and demonstrated it. The magazine published a story about the invention in its Dec. 22 edition.

“Mr. Thomas A. Edison recently came into this office,” it began, “placed a little machine on our desk, turned a crank, and the machine inquired as to our health, asked how we liked the phonograph, informed us that it was very well, and bid us a cordial good night.”