We all know that rock opera isn’t actually opera. It borrows some of the classical form’s affects—theatrical bombast and loud costuming, which seem a natural fit—but it doesn’t attempt the extreme formal rigor. Rock and roll is loose, intuitive, expressionistic, best played by or to libidinous kids or kids-at-heart; opera is tightly controlled and performed by trained vocal gymnasts to audiences of sophisticates. Both of these forms excel at emotive storytelling, but beyond that, with some rare exceptions, their similarities are mostly cosmetic. 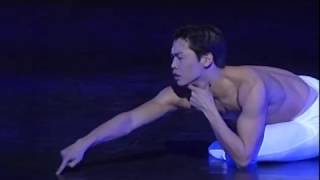 Now imagine not rock opera, but a rock ballet. What could athletic European classical dance contribute to songs about sex and drugs? What could electric guitars, drums, and keyboards do for pirouettes, arabesques, or grand jetés? Part of the problem with such a mashup comes—as noted above—from the intrinsic formal differences between the two. Pink Floyd’s David Gilmour put it well when he noted in 1973 that his band found ballet “too restricting for us. I mean, I can’t play and count bars at the same time.”

Yes, there was once a Pink Floyd ballet, or, well, almost. For reasons that may or may not be obvious, the attempt was not popular, and it has not gone down in either rock or ballet history as a memorable event. But it was an interesting experiment, perhaps both more compelling and more incoherent than one might think. An unusual collaboration between the prog-rock superstars and French choreographer Roland Petit, the show first began to take shape in 1970 over a series of lunches and dinner and drinks—as a high-concept adaptation of Proust.But the composition did not come easily. For one thing, the band couldn’t get through the source material. “David did the worst,” remembers Nick Mason, “he only read the first 18 pages.” Roger Waters reported that he finished “the second volume of Swann’s Wayand when I got to the end of it I thought, ‘Fuck this, I’m not reading anymore. I can’t handle it.’ It just went too slowly for me.” A common complaint from attempted readers of Proust. Petit then floated the idea of adapting A Thousand and One Arabian Nights, then Frankenstein. At one point, Roman Polanski and Rudolph Nureyev were attached as director and star. There was talk of a film.

All of these schemes were abandoned, including the plan for original music. “Nureyev, Polanski, and the 108-piece orchestra,” writes Nicholas Schaffner, “were conspicuous in their absence.” In Petit’s eventual piece, performed in Marseilles and Paris in 1972-73, the band “gamely appeared… to provide live renditions of ‘Careful with That Axe Eugene’ and three newer works in which the Syd-less Floyd had at last discovered its raison d'être: ‘Echoes,’ ‘One of These Days,’ and ‘Obscured by Clouds,’” among other existing songs. The whole endeavor was consistent with the band's other extra-curricular forays, into film and musique concrete for example, but the rote recycling of material was not.

The ballet, notes Dangerous Minds, “wasn’t shot live, but an in studio version was produced in 1977.” (You can see a clip from that rather slick artifact at the top of the post.) The other videos you see here come from rehearsals for the live 1973 shows (the clip second from top features interviews with Petit and a shy, French-speaking Gilmour). It's an odd affair: male dancers who all vaguely resemble Bruce Lee—and pull off some Lee-like punches; inexplicable synchronized line dances; dancers forming pairs to the harrowing screams of “Careful with That Axe, Eugene”; and a very contemporary 70s feel overall mark these performances as the kind of thing likely to feel deeply unsatisfying to connoisseurs of either Pink Floyd or the ballet.

Who, exactly, one wonders, was the audience for this? Maybe you'll get some sense of the appeal in the brief interviews and commentary from the French journalists in this rehearsal footage. Or perhaps a program from one of the Marseille performances sheds more light on the intentions behind this production. Petit did supposedly say, “It all began in the late ‘60s. One day my daughter… gave me an album by Pink Floyd and said, 'Dad, you have to make a ballet with this music.'” After some initial skepticism, “when I heard the music,” he remembers, “I agreed with my daughter.” Perhaps he simply couldn’t refuse her a request.

Those who did attend these shows may have been delighted, confused, bored, enraged, or some combination of any of these emotions and more besides. As for the band’s struggles, Gilmour admits, “we had to have someone sitting on stage with us with a piece of paper telling us what bar we were playing.” (Before you make a joke about how rock musicians can’t count, bear in mind most classical players can’t improvise.) At the end, however, audiences wouldn’t have been left wanting. “The ballet climaxed,” Schaffner writes, “with a typically Floydian flourish: ten cans of oil exploding like fireballs from the front of the stage.”