Only You (And You Alone)

The Platters first recorded the song for Federal Records on May 20, 1954, but the recording was not released. In 1955, after moving to Mercury Records, the band re-recorded the song (on April 26) and it scored a major hit when it was released in May. In November that year, Federal Records released the original recording as a single (B-side - "You Made Me Cry") which sold poorly. 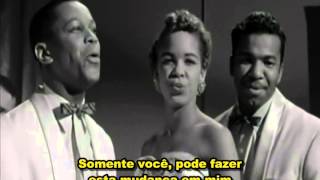 Platters bass singer Herb Reed later recalled how the group hit upon its successful version: "We tried it so many times, and it was terrible. One time we were rehearsing in the car ... and the car jerked. Tony went 'O-oHHHH-nly you.' We laughed at first, but when he sang that song—that was the sign we had hit on something."[4] According to Buck Ram, Tony Williams' voice "broke" in rehearsal, but they decided to keep this effect in the recording. This was the only Platter's recording on which songwriter and manager Ram played the piano.

The song held strong in the number-one position on the U.S. R & B charts for seven weeks, and hit number five on the Billboard Hot 100 chart.

It remained there for 30 weeks