Three suspected militants and a special forces soldier have been killed in a siege on an apartment in the outskirts of Tbilisi. During the siege that lasted more than 20 hours, explosions and gunfire rocked apartment building. Counterterrorism units stormed the block of flats in the Isani district. One of the alleged militants was arrested and four soldiers were wounded. The suspects were not thought to be Georgian nationals. Officials believed them to be members of a "terrorist group" and were working to identify which one, state security administration deputy chief Nino Giorgobiani said. She did not clarify their nationality, saying more information would be provided in the coming days. 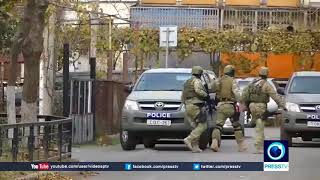 "It is important to note that Georgia's counterterrorism department has been conducting negotiations with them for several hours about surrendering but they rejected it", she emphasized. "The members of the criminal group opened fire from an automatic rifle and threw hand grenades."

Georgia, a mainly Christian country, has not had any jihadist-related incidents in recent years. Furthermore, BBC News writes, it is estimated that about 50 Georgians are fighting or have fought alongside the group known as Islamic State in Syria and Iraq. They are mostly ethnic Chechens living in Georgia's Pankisi Gorge, an area said to be a center of Islamist extremism.