A knife-wielding man in Sydney, Australia allegedly stabbed a woman to death.

Three Britons have been described as "heroes" for apprehending a knife-wielding man in Sydney, moments after he allegedly stabbed a woman to death and wounded another person. 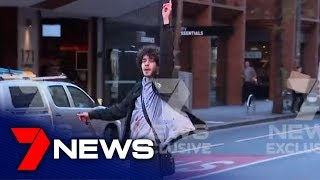 Footage posted online appears to show a suspect standing on a vehicle roof, holding a knife aloft and shouting, before being taken down by bystanders, who trapped him using chairs.

Police and witnesses said the knife-wielding man yelled "Allahu akbar", or "God is great", and attempted to stab several people in the Australian city before being arrested.

Although the incident is not being treated as terror-related, the suspected knifeman was described by police as a "lone actor" who may have some terrorist ideologies.

The violent attack that took place in Sydney this afternoon is deeply concerning. The attacker is now in police custody following the brave actions of those who were present at the scene and were able to able to restrain him. 9:19 AM ·

ScottMorrisonMP @ScottMorrisonMP The motivation for this attack has not yet been determined as Police are continuing with their enquiries. Any further offical information will be provided by the New South Wales Police, who are keeping us appraised through our agencies, including details of casualties.