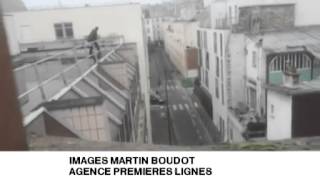 2 gunmen attack newspaper French satirical news magazine which has published cartoons of the Muslim Prophet Muhammad. Later witnesses and police officials said that multiple gunmen were involved, and that they were seen armed with AK47s and pump action shotguns. According to France's AFP news agency, the men were armed with at least one rocket launcher. Later French security agencies have identified the gunmen who carried out the attack at Charlie Hebdo. Suspects ages 18, 32, 34.  French Le Point revealed the nationality of the three Paris terrorists: Le Metro added that two of the three men, aged 18, 32 and 34 were actually born in France. And finally, according to French sources, their names: Said Kouachi, Cherif Kouachi and Hamyd Mourad. Later police announced all three were arrested 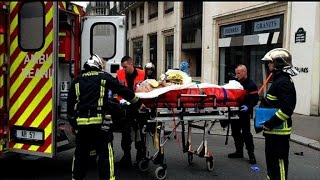 France raised its national alert system to its highest level following the attack at Charlie Hebdo in central Paris.

French President Francois Hollande told reporters that 12 people had been killed and four others were critically injured.

"We will find the people who did this," Hollande said. "France is today shocked by this terrorist attack."