During a December 14, 2008, press conference at the prime minister's palace in Baghdad, Iraq, al-Zaidi threw both of his shoes at then-United States President George W. Bush. The throwing of shoes is an act of extreme disrespect in the Arab culture. "This is a farewell kiss from the Iraqi people, you dog," yelled al-Zaidi in Arabic as he threw his first shoe towards Bush. "This is for the widows and orphans and all those killed in Iraq," he shouted as he threw his second shoe. Bush ducked twice to avoid being hit by the shoes. Prime Minister Maliki also attempted to catch one of the shoes to protect Bush. Al-Zaidi was pulled to the floor by another journalist, before being grabbed by Prime Minister Maliki'sguards, kicked, and rushed out of the room. White House spokeswoman Dana Perino was hit in the face by a microphone boom knocked over by a presidential bodyguard resulting in a black eye. 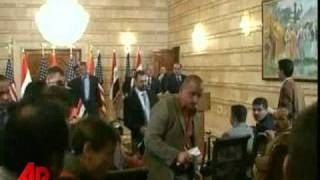 Bush said some Iraqi reporters had apologized to him. "Thanks for apologizing on behalf of the Iraqi people. It doesn't bother me." Bush said, "If you want the facts, it's a size 10 shoe that he threw." When asked about the incident by another reporter, Bush said, "It's a way for people to draw attention. I don't know what the guy's cause was. I didn't feel the least bit threatened by it." When later asked to reflect on the incident, Bush said, "I didn't have much time to reflect on anything, I was ducking and dodging. I'm not angry with the system. I believe that a free society is emerging, and a free society is necessary for our own security and peace," he added. "I don't think that you can take one guy throwing his shoe as representative of the people of Iraq," said White House Press Secretary Dana Perino. A fictional depiction of the shoe thrown at President Bush during a press conference in Iraq in 2008. Photograph taken at the Museum in TriBeCa, New York City.

Al-Zaidi was initially held by the prime minister's guards and was later turned over to the Iraqi army's Baghdad command. The command handed him over to the Iraqi judiciary. Hundreds took to the streets to demand his release. Al-Zaidi could have faced charges of insulting a foreign leader and the Iraqi prime minister. A conviction of these charges could have carried a sentence of up to two years in prison or a small fine, although it would have been unlikely to face the maximum penalty given his newfound "cult status" in the Arab world, according to a Middle-East observer.

An Iraqi lawyer stated that al-Zaidi was likely to get at least two years in prison if he was prosecuted. Al-Zaidi went before a judge on December 17, 2008. He declined to be represented by Khalil al-Duleimi, who defended the late Iraqi leader Saddam Hussein before his execution, and also said he wanted to be represented by an Iraqi lawyer. "I will introduce myself as his lawyer and demand the case be closed and Muntadher be released because he did not commit a crime," said Dheyaa al-Saadi, al-Zaidi's lawyer and head of the Iraqi Bar Association. "He only freely expressed himself to the occupier, and he has such a right according to international law." On December 17, 2008, al-Zaidi appeared privately before a judge from within the Green Zone.