ELTON JOHN AND JOHN LENNON PERFORM “I SAW HER STANDING THERE”

Listen to this track, recorded live by two friends who’d made a friendly bet; Elton John and John Lennon. It’s the lead track off of the Beatles first album, “I Saw Her Standing There”. The two pop stars performed it together at Madison Square Garden in 1974, over ten years after John’s old band, the Beatles, had first laid it down as young men, and subsequently performed it on their historic Ed Sullivan Show performance on February 9, 1964 in front of 73 million TV viewers. 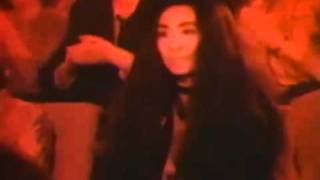 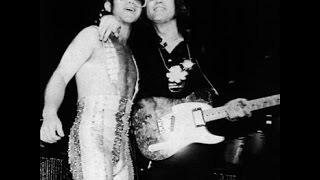 This particular performance is notable for at least two different reasons. First, it was the initial signs that Lennon and his erstwhile partner, and primary writer of this song Paul McCartney, were not so estranged by 1974 as audiences had been led to believe by a song like “How Do You Sleep?” three years earlier. Second, it was performed during a concert which would mark the last time John Lennon performed in front of a live audience. And it almost never happened at all, but for a bet between Elton and his reluctant friend John Lennon.

The two men had recorded a song – “Whatever Gets You Through the Night” – which would appear on Lennon’s Walls and Bridges record, cut during a period of estrangement with Lennon’s wife Yoko Ono. Therefore, this all happened at a particularly vulnerable time for John Lennon. Elton’s feeling was that it was a number one record. Lennon wasn’t so sure.

So, as if to help to boost Lennon’s confidence, Elton threw down the gauntlet; if the record went to number one, which Elton suspected it would, Lennon would join Elton on stage to perform it with him. Lennon lost, or rather he won: “Whatever Gets You Through the Night” did hit number one. By 1974, Elton knew a thing or two about number one records.

So, Lennon indeed joined the band on stage on American Thanksgiving, 1974. They performed three songs together: “Whatever Gets You Through The Night”, “Lucy In The Sky With Diamonds”, and this one.  Before performing this final song, Lennon addressed the crowd:

“”I’d like to thank Elton and the boys for having me on tonight. We tried to think of a number to finish off with, so that I could get out of here and be sick. … And we thought we’d do a number of an old estranged fiancé of mine called Paul. This is one I never sang, it’s an old Beatle number, and we just about know it.””

And they kicked into it.

In its own way, this concert was as historic as when the Beatles performed on the Ed Sullivan Show in 1964. It was a part of a movement to introduce Lennon to the mainstream again, away from the Beatles, and vouched for by one of the biggest acts of the time in Elton John.  It showed that despite his earlier casting down of his own image in the “Lennon Remembers” interview, and his blatant “I don’t believe in Beatles” assertion, Lennon still loved the songs. He couldn’t disown them. They were an important part of his past.  And ultimately, he couldn’t not believe in Beatles, where those songs were concerned.

And another historic moment occurred that night, albeit after the show. Lennon reunited with Yoko, who was in the audience that night. Their son Sean joined them less than a year later, and John would take up another role that he’d also once known as a younger man; the role of father to a baby boy.