The Cemfjord was built in 1984 and was converted to a specialist cement carrier in 1998.

On this voyage, it was carrying 2,000 tonnes of cement and had been sailing from Aalborg in Denmark to Runcorn in Cheshire. It was due to arrive on Monday.

Brise of Hamburg said the ship had successfully completed its classification renewal inspections during December 2014.

It was found overturned in Saturday. 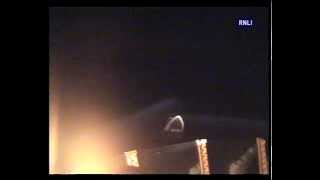 Four lifeboats, two rescue helicopters and other vessels were involved in the search on Saturday.

MCA watch manager Susan Todd told the BBC the chances of finding survivors were very slim: "That's correct. Obviously our thoughts are with the families of those involved at this time.

"However we are making best use of daylight and reasonable weather conditions today and we will maintain the search effort through the hours of daylight, looking for people in the water or any signs of wreckage or debris from the vessel - liferafts, lifeboats, etc."

The last confirmed sighting of the ship was at about 13:00 on Friday. It is understood the alarm was raised by the crew of the ferry Hrossey at 14:30 on Saturday.

The Hrossey, which was sailing to Aberdeen, spent time in the area looking for survivors.