Steve Strange (born Steven John Harrington, 28 May 1959 - 12th February 2015) was a Welsh pop singer, best known as the lead singer and frontman of the 1980s pop group Visage. Since the late 1970s he was also a prominent nightclub host and promoter. 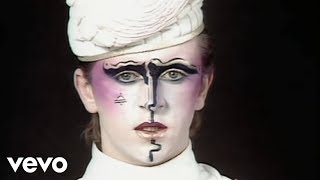 Harrington was born in Newbridge, Caerphilly, Wales, but his grandfather moved with his family to Aldershot, Hampshire, where his father was serving in the British Army as a paratrooper. The family moved back to Wales and lived in Rhyl on the north coast, where his parents bought a large guest house and opened sea front cafes. They then divorced and he moved with his mother back to Newbridge in South Wales where he attended Newbridge Grammar School. It merged with a secondary school to form Newbridge Comprehensive School a year after he arrived there, and he subsequently lost interest in all subjects but art.

After seeing a Sex Pistols concert at the Castle Cinema in Caerphilly in 1976, Harrington befriended the bass player Glen Matlock. He then arranged gigs for punk bands in his home town and befriended Jean-Jacques Burnel of The Stranglersbefore leaving for London where he worked for Malcolm McLaren and formed a punk band called The Moors Murderers withSoo Catwoman. Further members included future Pretenders frontwoman Chrissie Hynde, future Psychedelic Furs drummer Vince Ely, future Clash drummer Topper Headon and the Kid (who was formerly in Adam and the Ants, as Mark Ryan). They recorded a song called "Free Hindley". After a number of gigs, the band split up around early 1978.

Later in 1978, Harrington briefly joined the punk/new wave band The Photons (originally from Liverpool) as vocalist and co-songwriter at the behest of David Littler (ex The Spitfire Boys). The band were managed by Punk impresario Andy Czezowski.

Harrington was also the subject of the 1982 song "Poseur" by the punk band Combat 84.

Shortly after leaving The Photons, and then using the alias "Steve Strange", Harrington formed Visage with then Rich Kidsmembers Rusty Egan and Midge Ure and Magazine members Barry Adamson, John McGeoch & Dave Formula. Intended as a studio-based project, they signed to the small label Radar Records and released their first single "Tar" in 1979. The single was not a success, but the following year, Strange appeared in the video for David Bowie's no.1 hit "Ashes to Ashes", a song which helped to propel the burgeoning New Romantic fashion movement into the mainstream (although Bowie himself was never directly associated with it). Later that year, Visage signed a new record deal with the major label Polydor and released their second single, "Fade to Grey". The single became a top 10 hit in the UK and several other European countries, reaching number one in Germany and Switzerland. As the public face of the band, Strange shot to stardom in Britain and other parts of Europe. Visage enjoyed a string of hit singles and two hit albums before later commercial disappointments led to their break-up in 1985.

After the dissolution of Visage, Strange formed the short-lived band Strange Cruise with Wendy Wu (formerly of The Photos). The group signed with EMI Records and released two singles and an album in 1986, though failed to gain any chart success.

In the late 1970s, prior to their success with Visage, Strange and Visage partner Rusty Egan began to make a name for themselves as a nightclub host and DJ respectively at "Blitz" in London. Adhering to Strange's strict door policy of admitting only "the weird and wonderful", the club took off and became an essential location in the rise of what would become the New Romantic movement. Following this, Strange and Egan then fronted the Camden Palace nightclub for two years, which became one of the most famous venues of the era, attracting major celebrities on a regular basis. However, after conflicts with the financial backers of the club, Strange and Egan left the Camden Palace and moved on to a new club named "The Playground", but this venue was not as successful.

Later in the 1980s, Strange went to Ibiza, Spain and became an integral part of the budding trance club movement and hosting parties for celebrities such as Sylvester Stallone. In the early 1990s he was the host at the "Double Bass" club in Ibiza.

In 2002, Strange took part in the Here and Now Tour, which featured a revival of various 80s pop acts. In 2004, he then formed a new version of Visage, dubbed Visage Mk II, with various musicians from modern electronic bands. None of the other original members were involved in the project. With a plan to re-record some of the older, classic Visage tracks as well as produce some new material, the project never seemed to fully get off the ground despite some television appearances. The first Visage Mk II song was called "Diary of A Madman", which was made available for download in 2007 in return for a donation to the Children In Need appeal. However, after this, no further material from this version of the band surfaced.

In 2006, Strange collaborated with electronic music duo Punx Soundcheck for their album When Machines Rules The World, co-writing and performing on the track "In The Dark".

In February 2012, Strange appeared as a guest on the ITV chat show Loose Women. He stated that he was still working on a new Visage album and that nine tracks had been completed to date. In early 2013, Strange announced another new version of Visage featuring himself and former member Steve Barnacle, along with former Ultravox guitarist Robin Simon and vocalist Lauren Duvall. A new album, Hearts and Knives, was released in May 2013 (the first new Visage album in 29 years). In support of the album, the band made several live appearances in the UK and Europe in 2013.

Parallel to recording new Visage material, Strange has also been involved in another music project, The Detroit Starrzz. The group, which consists of Strange and various DJ/remixers, released their first single, "Halo", in 2011. While appearing on the chat show Loose Women in February 2012, Strange stated he had recorded a full album with the group, with another single, "Aiming For Gold", to be released later in 2012. The group played a live set at the Citrus Club in Edinburgh on 3 February 2012.

Strange has always been somewhat ambiguous about his sexuality, although he has made it known he has had relationships with both men and women.

For many years, Strange battled a heroin addiction. In later years he suffered a nervous breakdown and was also arrested for shoplifting. In court, he was found guilty and given a three-month suspended sentence as the British media had a field day publicising the case of a pop star who had fallen on hard times.

In 2002, Strange published his autobiography, Blitzed!, in which he speaks about his heroin addiction, his nervous breakdown, his sexuality, and the ongoing attempts to get his life back together.

Strange was portrayed in Boy George's 2002 stage musical Taboo which reflected on the New Romantic scene of the early 1980s.

In 2005, Strange appeared in a Channel 4 documentary called Whatever Happened to the Gender Benders?, which reflected on the advent of the New Romantic movement of the early 1980s and the prominent roles that Strange, Boy George andMarilyn each played within it. In stark contrast to the relative glamour of the New Romantic era, interviews with all three stars in the present day highlighted the sheer devastation that fame, fortune and drug addiction had taken on each of them during the past 25 years, with Strange and Marilyn in particular being openly candid about the mental health problems they now try to cope with every day.

In November 2006, Strange took part in, and went on to win, the BBC reality series for Children in Need Celebrity Scissorhands. He returned to the show in 2007 and 2008 as Assistant Manager/Image Consultant. In that role, he was in charge of the catwalk, showing all of the best haircuts of the series and also people dressed in 80s style clothing and make-up.

In 2008, Strange (and Visage II keyboardist Sandrine Gouriou) made an appearance in the BBC drama series Ashes to Asheswhich is set in 1981. In it, they performed the song "Fade to Grey" in a scene set in the "Blitz" nightclub.

In 2009, Strange and Rusty Egan appeared in Living TV's Pop Goes the Band, a series in which pop stars from the 1980s are given a complete makeover in return for a one-off performance. The Visage episode aired on 16 March 2009, and was the first time that the two men had spoken in over 20 years. The episode focused (like others in the series) more on getting them fit in the gym than on the current state of their relationship, though they appeared to get on well enough. At the culmination of the episode, they performed "Fade to Grey".

In 2010, Strange was portrayed by actor Marc Warren in the BBC programme Worried About The Boy, a dramatisation of Boy George's rise to fame. Although the programme was set in the early 1980s, when Strange was in his early 20s, Warren was 43 at the time of production.

In January 2011, Strange and Rusty Egan reopened the "Blitz" Club for one night, with performances from Roman Kemp's band Paradise Point and electro punk artist Quilla Constance plus DJ sets from Egan himself.

In January 2013, Strange appeared on the Channel 4 News discussing the forthcoming release of David Bowie's album The Next Day.

On 3rd December 2014, Strange was admitted to the Princess of Wales hospital in Bridgend with 'breathing difficulties'.

On 12th February 2015, Strange was reported to have died of a heart attack. News reports quoted his record company confirming his death in Sharm-el-Sheikh, Egypt.