Ariane Daniela Forster (17 January 1962 – 20 October 2010), known by her stage name Ari Up, was a German-born vocalist best known as a member of the English punk group, The Slits. 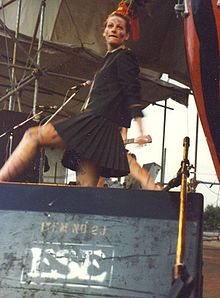 Ari Up playing with the Slits atAlexandra Palace in 1981.

Ariane Daniele Forster was born in Munich, Germany, the granddaughter of a wealthy German newspaper proprietor. Her mother, Nora, was known in the music industry, as she was a friend of Jimi Hendrix and dated Chris Spedding for three years. Ari noted that Jon Anderson, the singer of the group Yes, was her godfather.

Nora would later date and marry the Sex Pistols' lead singer,John Lydon. Their home was known to be something of a punkdomain, where Nora would take in poor musicians. The constant presence of punk music led to Ari Up experimenting in it herself, learning guitar skills from The Clash's Joe Strummer.

Ari Up was fourteen years old when she formed The Slits with drummer Palmolive in 1976, herself in possession of 'posh piano lessons and a good ear'. Within a short time, guitarist Viv Albertine joined the group and found herself deeply impressed by the young singer. "English was her second language," Albertine noted in an interview. "It was not easy for her and she had to fight to be taken seriously." She succeeded: "Ari was the most dynamic woman I have ever known," said Albertine. "The way she carried herself was a revolution."

By the late 1970s, the Slits were touring as the opening act for the Clash. Ari Up's love of reggae led the Slits into a "jungly", dub style. She was the most flamboyant member of the group. Her wild hair and crazy stage outfits became her trademarks. She can be seen briefly in the Clash movie, Rude Boy, with the band backstage. Her 1977 performances with the Slits are featured in The Punk Rock Movie, a 1992 release of various punk group club performances, principally at The Roxy.

After the Slits split in 1981, she moved with her husband and twin children to jungle regions of Indonesia and Belize, living among indigenous people in those areas. Later, they moved to Jamaica, eventually settling inKingston.

She continued to make music, first with the New Age Steppers, then solo as Baby Ari, Madussa, and Ari Up. Despite growing up in England, Ari Up possessed an unusual accent, a cross between German, English and Jamaican. Her first full-length solo album, Dread More Dan Dead, was released in 2005.

In 2006 Ari Up reformed the Slits with original bass player Tessa Pollitt. They released an EP and later toured in Europe, North America, Australia, and Japan. She occasionally played solo concerts in New York, and toured the UK with her backing band 'The True Warriors'. She also recorded with the Jammyland All Stars, Brave New Girl, Dubistry, and the German techno-dancehall outfit, Terranova.

Ari Up appeared on Lee "Scratch" Perry's 2008 album, Repentance, and performed a duet on a cover version of Mike Hugg's song "Mister You're a Better Man Than I" on Mark Stewart's 2008 album, Edit.

In July 2009, she performed with Perry and Austrian dub band Dubblestandart in Brooklyn, New York, just prior to the Central Park SummerStage festival. One of Ari's last recordings done in May 2010 in New York was on a track with Lee Scratch Perry recorded by Subatomic Sound System and released in August 2010 on 7" vinyl called "Hello, Hell is Very Low" b/w "Bed Athletes". The Slits' final work, the video for the song "Lazy Slam" from Trapped Animal, was released posthumously in accordance with Ari Up's wishes.

Ari Up died aged 48 from cancer in Los Angeles on 20 October 2010. Her death that morning was initially announced on her stepfather John Lydon's homepage.

A tribute Punky Reggae Birthday Party was held in at the Music Hall of Williamsburg by Dunia Best, Aram Sinnreich and Vivien Goldman on Brooklyn on 16 January 2011. Neneh Cherry, Tessa Pollitt, and Hollie Cook and other former members of the Slits performed as well as members of the True Warriors, New Age Steppers, and friends from all over the world. A tribute 'A punky reggae tribute to Ari Up' was held in Bristol on 30 July 2011. The evening included performances by Tessa Pollitt, Hollie Cook, Adrian Sherwood (ON U Sound), Mark Stewart (Maffia, the Pop Group), Viv Albertine, and included a screening of the Slits' last video "Lazy Slam" and other Slits footage and a special video presentation 'A Tribute To Ari' (featuring rare and unseen stills and video).