Oleksander Mykolayovych Rzhavsky was a candidate in the 2004 Ukrainian presidential election, nominated by the "United Family" Party, of which he is the head. Businesman, pro-Russian politician

Presidential candidate in 1999, when he won 0.37% of the votes, and finished in 9th place. He was vice-chair of the board of Montazhspetsbank in 1996–97, and president of Koral Bank in 1997–98. In his program, he promised to establish order in Ukraine, using the methods of Russian President Vladimir Putin. 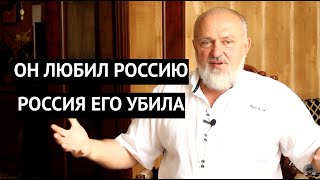 Killed in Bucha, near Kiiv, by Russians, when refused to bring more alchocole for Russian invaders who looted his house.

Oleg Torgalo, a businessman, Ayurvedic doctor and chairman of the Ukraine-India Society, said on Facebook that Alexander Rzhavsky stopped communicating after March 4, when the fighting for Bucha escalated and the city was occupied. On April 4, Torgalo was able to communicate with his daughter. She said that during the occupation, her father was twice kidnapped as the owner of a large estate, demanding a ransom, and both times he managed to free himself without money. They were robbed, their phones, a collection of weapons were taken away.

On April 27 (03/27/2022?), the Muscovites had a drinking party at their house. And when the father made a remark to them and refused to give vodka once again, he was shot right in the house.