Eli Herschel Wallach (December 7, 1915 – June 24, 2014) was an American film, television and stage actor whose career spanned more than six decades, beginning in the late 1940s. For his performance as Silva Vacarro in Baby Doll, he won a BAFTA Award for Best Newcomer and a Golden Globe nomination. Among his most famous roles are Calvera in The Magnificent Seven (1960), Guido in The Misfits (1961), and Tuco in The Good, the Bad and the Ugly (1966). 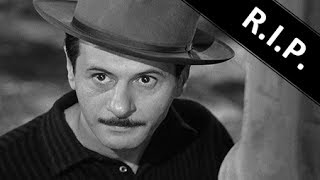 Other notable portrayals include Don Altobello in The Godfather Part III, Cotton Weinberger in The Two Jakes (both 1990), and Arthur Abbott in The Holiday (2006). One of America's most prolific screen actors, Wallach remained active well into his nineties, with roles as recently as 2010 in Wall Street: Money Never Sleeps and The Ghost Writer.

Wallach received BAFTA Awards, Tony Awards and Emmy Awards for his work, and received an Honorary Academy Award at the 2nd AnnualGovernors Awards, presented on November 13, 2010.

Wallach was born in Red Hook, Brooklyn at 156 Union St., the son of Polish Jewish immigrants Bertha (née Schorr) and Abraham Wallach. They were the only Jewish family in an otherwise predominantly Italian Americanneighborhood. His parents owned Bertha's, a candy store. Wallach graduated in 1936 from the University of Texas at Austin with a degree in history and in 1938 received a masters degree in education from the City College of New York. He gained his first Method experience at theNeighborhood Playhouse School of Theatre in New York City. While attending the University of Texas, Wallach performed in a play with fellow students Ann Sheridan and Walter Cronkite.

Wallach served as a United States Army staff sergeant in a military hospital in Hawaii during World War II. He was soon sent to Officer Candidate School (OCS) in Abilene, Texas to train as a medical administrative officer. He graduated as a Second Lieutenant and was sent to Madison Barracks in upstate New York. He was promptly shipped to Casablanca and, later in the war, to France. It was there that a superior discovered his acting history and asked him to form a show for the patients. He and other members from his unit wrote a play called Is This the Army?, which was inspired by Irving Berlin's This Is the Army. In the comedic play, Wallach and the other men clowned around as various dictators, with Wallach portraying Adolf Hitler, the leader of Nazi Germany.

Wallach took classes in acting at the Dramatic Workshop of the New School in New York with the influential German director Erwin Piscator. Later, he attended the Actors Studio from its inception; there, he studied acting with founding member Robert Lewis, alongside Marlon Brando, Montgomery Clift, Herbert Berghof, and Sidney Lumet, and his soon-to-be wife, Anne Jackson.[10] Wallach made his Broadway debut in 1945 and won a Tony Award in 1951 for his performance in the Tennessee Williams play The Rose Tattoo. Additional theater credits include Mister Roberts, The Teahouse of the August Moon, Camino Real, Major Barbara, Luv, and Staircase, co-starring Milo O'Shea, which was a serious depiction of an aging homosexual couple. He also played a role in a tour of Antony and Cleopatra, produced by the actress Katharine Cornell in 1946 He last starred on stage as the title character in Visiting Mr. Green.

Wallach's film debut was in Elia Kazan's controversial 1956 Baby Doll, and he went on to a prolific career in films, although rarely in a starring role. Other early films include The Lineup, The Misfits with Clark Gable and Marilyn Monroe, The Magnificent Seven with Yul Brynner and Steve McQueen, Lord Jim with Peter O'Toole, a comic role in How to Steal a Million with Audrey Hepburn, and perhaps most famously, as Tuco (the 'Ugly') in Sergio Leone's The Good, the Bad and the Ugly with Clint Eastwood. After the latter's success, Wallach appeared in several other spaghetti westerns, includingAce High.

Wallach is central to one of the most infamous show business legends. In 1953 he was cast as Angelo Maggio in the film From Here to Eternity, but was abruptly replaced by Frank Sinatra before filming began. Sinatra went on to win an Oscar for the performance, which revived his career. Sinatra purportedly used pressure from his underworld connections to get the part, an incident that inspired the Johnny Fontane character in the classic 1972 film The Godfather. To spare Sinatra embarrassment, Wallach says he turned down the role to appear in a Tennessee Williams play, claiming: "...[w]henever Sinatra saw me, he’d say, 'Hello, you crazy actor!'"

In 2006, Wallach made a guest appearance on the NBC show Studio 60 on the Sunset Strip, playing a former writer who was blacklisted in the 1950s. His character was a writer on The Philco Comedy Hour, a show that aired on a fictional NBS network. This is a reference toThe Philco Television Playhouse, in several episodes of which Wallach actually appeared in 1955. Wallach earned a 2007 Emmy nomination for his work on the show.

Before accepting a role as a villain in Leone's Once Upon a Time in the West, Henry Fonda called Wallach and asked "What the hell does he [Leone] know about the West?" Wallach assured Fonda he would be pleasantly surprised if he accepted the role. After the film's success, Fonda called Wallach back to thank him.

Wallach and Leone had built a good relationship during shooting The Good, the Bad and the Ugly, but had a falling-out later on. Leone had asked Wallach to play a role in his upcoming film, A Fistful of Dynamite, but the actor explained he had a scheduling conflict. After much pleading, Wallach finally relented and turned down the other offer and waited for Leone to raise enough Hollywood money for the picture. However, the studio Leone went to had an actor, Rod Steiger, with one more picture in his studio contract and the studio announced that Leone would have to use him if they were to put up any financing. Leone then called to apologize to Wallach, who remained dumbstruck on the other end of the line. After even refusing to give Wallach a token payment for losing out on two jobs, the actor said, "I'll sue you"—to which Leone replied, "Get in line", and slammed down the phone. In his autobiography, Wallach relates the incident as regrettably being the final time the two spoke to one another.

Wallach played Mr. Freeze in the 1960s Batman television series. He wrote in his autobiography that he received more fan mail about his role as Mr. Freeze than about all of his other roles combined.

On November 13, 2010, at the age of 94, Wallach received an Honorary Academy Award for his contribution to the film industry at the 2010 Governor's Awards ceremony of the Academy of Motion Picture Arts and Sciences.

Eli Wallach has been married to stage actress Anne Jackson (born 1926) since March 5, 1948, and they have three children: Peter (born 1951), Roberta (born 1955), and Katherine (born 1958). Roberta had an acting experience as a mentally disturbed teenager in Paul Zindel's The Effect of Gamma Rays on Man-in-the-Moon Marigolds.

In 2005, Wallach released his autobiography The Good, the Bad and Me: In My Anecdotage. In it, Wallach wrote about his famous role as Tuco in The Good, the Bad and the Ugly, commenting that he did not realize he was going to be "blessed" with the title "Ugly" until he saw the film. He remarked that it was an honor to work with Clint Eastwood, whom he praised for his professionalism. Wallach also mentioned that director Sergio Leone was notoriously careless regarding the safety of his actors during dangerous scenes. It was during filming that Wallach accidentally drank from a bottle of acid that a film technician had carelessly placed next to his soda bottle. He spat it out immediately, but was furious because his vocal cords could have been damaged if he had swallowed any of it. Leone gave him some milk to wash out his mouth and apologized for the incident, but also commented that accidents do happen.

Wallach lost sight in his left eye as the result of a stroke. According to his autobiography, the incident occurred "some years ago".

His niece is historian Joan Wallach Scott (the daughter of his brother, Sam Wallach). A. O. Scott, a film critic for the New York Times, is his great-nephew.