Gabriel Narutowicz  was a Polish professor of hydroelectric engineering at Switzerland's Zurich Polytechnic, Polish Minister of Public Works (1920–21), Polish Minister of Foreign Affairs (1922), and the assassinated first president of the Second Polish Republic (1922). 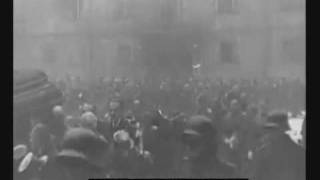 Gabriel Narutowicz was born into a Polish-Lithuanian noble family in Telsze (now Telšiai in Lithuania) which was part of the Russian Empire and earlier partitioned Polish-Lithuanian Commonwealth. His father, Jan Narutowicz, was a local district judge and also a landholder in the Samogitian village of Brėvikiai. As a result of his participation in the January 1863 Uprising against Imperial Russia, he was sentenced to a year of imprisonment; he died when Gabriel was only one year old.

Gabriel’s mother, Wiktoria Szczepkowska, was Jan's third wife. Following her husband's death she raised her sons herself. An educated woman, intrigued by the philosophy of the Age of Enlightenment, she had a great influence on the development of Gabriel and his siblings' world view.

In 1873 she moved to Liepāja, Latvia, so that her children would not have to attend a Russian school, since after the Uprising of 1863, Russification was less strongly enforced there.

After Lithuania regained independence in 1918, Gabriel Narutowicz’s brother, Stanisław Narutowicz, became a Lithuanian citizen. Earlier towards the end of World War I, Stanisław became a member of the Council of Lithuania, the provisional Lithuanian parliament. He signed the Lithuanian Act of Independence of 16 February 1918.

Narutowicz finished his secondary education at the gymnasium in Liepāja, Latvia. He then enrolled at the Institute for Mathematical Physics in St. Petersburg.

Illness, however, caused him to suspend those studies and to later transfer to the Zurich Polytechnic in Switzerland, where he studied from 1887 to 1891.

During his studies, he helped Poles who were on the run from the Russian authorities. He was also connected with a Polish émigré socialist party, "Proletariat". As a result, he was banned from returning to Russia, and the Russian authorities issued a warrant for his arrest. In 1895 Narutowicz became a Swiss citizen and, after completing his studies, got his first job on the construction of the St. Gallen railway.

He was an excellent construction engineer.

In 1895 he became a chief of works on the River Rhine. Later he was hired by the Kurstein technical office. His works were exhibited at the International Exhibition in Paris (1896) and he became a famous pioneer of electrification in Switzerland. He directed the construction of many hydroelectric power plants in Western Europe (in places such as: Monthey, Mühleberg and Andelsbuch).

In 1907 he became a professor at ETH Zurich, in the water construction institute in Zurich. He was dean of that institute from 1913 to 1919. He was also a member of the Swiss Committee for Water Economy. In 1915 he was chosen chairman of the International Committee for regulation of the River Rhine.

During World War I he cooperated with the General Swiss Committee that helped victims of the war in Poland. He was also a member of La Pologne et la Guerre, located in Lausanne. He strongly believed in ideas voiced by Józef Piłsudski.

In September 1919, Narutowicz was invited by the Polish government to return to Poland, which he began helping rebuild.

After coming back to Poland, on 23 June 1920 Narutowicz became the Minister of Public Works in Władysław Grabski’s government.

He held that post until 26 June 1922 (in four different subsequent cabinets: of Władysław Grabski, Wincenty Witos and the first and the second government of Antoni Ponikowski). After becoming the Minister of Public Works, Narutowicz immediately started to work on the rebuilding of his destroyed country. He used the experience he had acquired while working in Switzerland, where he had been a pioneer of electrification. He reorganized the reconstruction administration and reduced the number of people employed in that field by about four times over the course of two years (in order to increase its efficiency).

He travelled around the country to supervise and control the works.

By 1921 almost 270,000 buildings had been rebuilt, over 300 bridges and most of the roads were mended and about 200 km of highways was built. He designed dams and supervised the building of the hydroelectric power plant in Porabka on the river Soła, in Beskid Mountains and worked on river control of the Vistula River.

He was perceived as a reasonable and broad-minded man. He was a member of the government in every subsequent cabinet (it was the period of constant government crises).

In April 1922, Narutowicz was delegated (together with the Minister of Foreign Affairs of the time, Konstanty Skirmunt) to participate in the Genoa Conference. Thanks to him the Polish delegation was successful. According to some, a lot of foreign diplomats had greater trust in Narutowicz (he was highly respected in the West) than in the government of a newly established country.

On 28 June 1922, he became the Minister of Foreign Affairs in Artur Śliwiński’s government. He also held that post in the later government of Julian Ignacy Nowak.

In October 1922, he was a representative of Poland at a conference in Tallinn.

In the Polish legislative election, 1922, he supported the National Public Union (Pol: Unia Narodowo-Państwowa), connected with Józef Piłsudski. He was a candidate of the Public Union on Eastern Borderland (Pol: Państwowe Zjednoczenie na Kresach); however, he did not get a seat in the Parliament.

After having lost the elections, Gabriel Narutowicz continued to be the Minister of Foreign Affairs in the government of Julian Nowak. He was surprised that in December he was chosen to be one of the candidates in the presidential elections. Even Józef Piłsudski dissuaded him from standing for election. At first he wanted to decline the proposal of the members of Polish People's Party "Wyzwolenie" (Pol: Polskie Stronnictwo Ludowe “Wyzwolenie - PSL “Wyzwolenie”) but eventually accepted it.

At that time (according to the March Constitution of Poland - 1921) the president was chosen by the National Assembly (Pol: Zgromadzenie Narodowe – Sejm and Senate). There was no winner after the first round of voting. In the next round the socialist candidate, Ignacy Daszyński, was eliminated, but no one won either. The next ones to drop out were: the candidate of the united groupings of the national minorities, Jan Baudouin de Courtenay and Stanisław Wojciechowski (supported by some part of the Left). In the last round, which had to be decisive, there were two candidates left: count Maurycy Zamoyski (connected with the right-wing National Democracy movement) and Gabriel Narutowicz (supported by some left wing parties and national minorities).

Narutowicz won thanks to votes of the Left, national minorities (who were opposed to the National Democracy movement) and Polish People’s Party “Piast” (Pol: Polskie Stronnictwo Ludowe “Piast” – PSL “Piast”), which (contrary to expectations) in the last round of voting supported Narutowicz, not the candidate of the right wing, Zamoyski. Eventually, Narutowicz got 289 votes and count Zamoyski – 227. Narutowicz was elected the first president of the Second Polish Republic.

Narutowicz's victory in the elections came as a surprise to the right wing. Following Narutowicz's election, Catholic and nationalist groups began an aggressive campaign against him. Among other things, they accused him of being an atheist and a Mason. Some segments of the press called him “the Jewish president”. The right wing, supported by General Józef Haller, also criticized his relations with Józef Piłsudski and his support of Piłsudski's policies. Manifesting their opposition against the swearing-in of the president-elect, members of the National Democracy movement staged anti-government demonstrations in Warsaw.

Gabriel Narutowicz was president of the Polish Republic for only five days. He took the oath of office on 11 December 1922. Earlier on that day, opponents of his election tried to prevent the president-elect from getting to the Sejm by blocking the streets and throwing mud at his motorcade. Narutowicz was uncomfortable with the widespread belief that he was the representative of the Left. He only became the candidate of the Polish Peasant Party "Wyzwolenie" by happenstance; he had also not expected to win the election (in the first round Narutowicz gained just 62 of the votes; whereas, count Maurycy Zamoyski – 222).

During his first days after taking office, Gabriel Narutowicz met with the representatives of the Christian Democratic Party and Cardinal Aleksander Kakowski. Narutowicz realized that it would be impossible to form a majority government in the Parliament, so he made an attempt to create a government beyond the purview of parliament. As a gesture to the right wing, he offered the post of Minister of Foreign Affairs to his recent opponent, Maurycy Zamoyski.

Only five days after taking office, on 16 December 1922, Narutowicz was assassinated while attending an art exhibition, in the National Gallery of Art “Zachęta”. The assassin was a painter, Eligiusz Niewiadomski, who had connections with the right wing National Democratic Party. Narutowicz's murder was the culmination of an aggressive propaganda campaign vilifying him. His assassin was sentenced to death and his execution took place outside of the Warsaw Citadel on 31 January. Part of the right wing camp perceived him as a hero.

The murder of the first president of the Second Polish Republic and the angry canvassing against him revealed impermanence of democratic mechanisms in Poland at that time. December 1922 revealed a huge level of intolerance and nationalist feeling in Polish society.

The murder of Narutowicz was the main theme of the 1977 Polish feature film Death of a President (Pol: Śmierć prezydenta), directed by Jerzy Kawalerowicz.