Alexander “Sasha” Siemel (Latvian: Aleksandrs Ziemelis) was an American/Argentinian/Brasilian adventurer, hunter, guide, actor, writer, photographer, and lecturer of Latvian origin. He spoke seven languages and boasted of having experienced more adventure in a single year than most men had witnessed in a lifetime. He is known among sportsmen, claiming to have successfully hunted more than 300 jaguars — or “onças”, as the big cats are colloquially known in parts of Latin America—in the Mato Grosso jungles of Brazil. Siemel's accomplishments in pursuing the large and often dangerous jaguar (the biggest cat in the western hemisphere and third largest in the world) are all the more impressive because on many of his hunts he was allegedly armed only with a spear.

Born in Riga, Latvia, Siemel moved to the United States in 1907 at the age of 17. Staying in the states for only two years, he subsequently headed for Argentina where he was employed in a Buenos Aires printing shop.

In 1914 Siemel traveled to the jungles of Brazil where he worked as a gunsmith and mechanic in the diamond mining camps of the Mato Grosso. There he met a native who taught him to become a "Tigrero;" that is, a hunter who kills jaguars armed only with a spear. In the article “Interviewing the Tiger-Man”, Siemel states:

“… I learned the art from a poor native who had nothing but a home-made spear where I had my high-powered rifle. But I do think I was a good pupil and will admit that it calls for experience and judgment."

In the July 1937 issue of Ye Slyvan Archer, he wrote that:

“It is only logical and natural that I should (prefer the bow to the rifle). The spear is a primitive weapon, so is the bow. While I would not want to say that hunting big cats with a rifle can not be plenty dangerous and exciting under all circumstances, particularly so in our Matto Grosso jungles, where vision is extremely limited, it seems to me that the bow complements the spear. If I now had any use for a shield besides, I should feel perfectly equipped.”

With his skill as a hunter Siemel worked on ranches of the Pantanal hunting jaguars, or "onças," hired by landowners to protect their livestock. 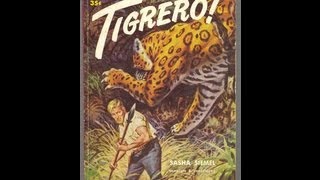 In 1925, he killed his first jaguar using a zagya, a seven-foot spear, making him the first white man to accomplish such a feat. This did not long go unnoticed by the “civilized world."

By 1931 a monograph, Green Hell, by Julian Duguid, appeared. The book recounts a 1929 trip across the Pantanal where the author and two fellow adventurers employ Siemel as their guide. Here Siemel is first given the moniker “Tiger Man,” which went on to become the title of Duguid’s 1932 biography of the hunter. Encouraged by Duguid, Siemel began to lecture at explorer clubs throughout the world.

In 1937, while lecturing in Philadelphia, Siemel met Edith Bray, a young photographer, who later joined him in the Pantanal. Three years later, at the age of 47, he married Edith, and the two remained in the Pantanal and began raising a family. During this time, Siemel became an actor, appearing in the 1937 fifteen-episode Frank Buck serial Jungle Menace as Tiger Van Dorn. The serial was compiled into a feature film in 1946 and released under the title Jungle Terror.

Sasha, Edith and their children, Sondra, Dora, and Sasha Jr. (Sashino), moved to southeastern Pennsylvania after purchasing a farm in 1947.

Bom Retiro, as they named the farm, became Siemel's permanent residence for the rest of his life. Here the Siemels' second son, Carlie, was born in 1955, completing the family. Siemel led a quiet life, lecturing and continuing to lead expeditions to South America. He now spoke six languages: Latvian (learned in the streets in Riga), Russian (in the schools he attended as a youngster in Latvia), German (at home, his mother was German), English (in the USA), Spanish (in Argentina), and Portuguese (in Brazil).

As an author, Siemel had been writing articles for various outdoor magazines, including National Geographic. In 1949, Sasha and Edith co-wrote the book Jungle Wife, an account of family life in the jungle. He penned his autobiography,Tigrero, in 1953. It was to be made into a movie by director Samuel Fuller. Instead, Tigrero is the subject of a 1994 documentary by Mika Kaurismäki. Tigrero: A Film That Was Never Made featured Fuller and Jim Jarmusch visiting the proposed Amazon locations of the film. In 1954, Siemel’s book Jungle Fury was published. (Jungle Fury is the same book as Tigrero but retitled for the UK.)

Siemel was interviewed by journalist Charles Collingwood for the Adventure series produced by the American Museum of Natural History and broadcast on the CBS television network in 1953.

The family returned to Brazil briefly in 1959, when Sashino was thirteen years old.

His adventure is told in the 1965 book Sashino.

In 1963,The Sasha Siemel Museum and Store opened in Perkiomenville, Pennsylvania, in a century-old former story mill located on the Perkiomen Creek. The museum housed Siemel's collection of hunting trophies, works of art, curios, minerals, shells, coins, weapons, Indian utensils and many other items.

“Among the most interesting of the displays are Sasha Siemel’s mementos of his many years of daring adventures and explorations as the only white man to hunt jaguars armed with a hand-made spear. Here are the trophies of many exciting hunts and the equipment used in hunting and capturing jaguars.”

Museum admission was 75 cents for adults and 25 cents for children. The museum closed in 1969 after Siemel's last trip to the Pantanal, in which he guided a group of geologists. Sasha Siemel died in Montgomery County, Pennsylvania, in 1970 at the age of 80 .