Stephen Ward is a musical with a book and lyrics by Don Black and Christopher Hampton, with music by Andrew Lloyd Webber.

Based on the real life events behind the 1963 Profumo Affair, the musical made its West End and world premiere at London's Aldwych Theatre in 2013. 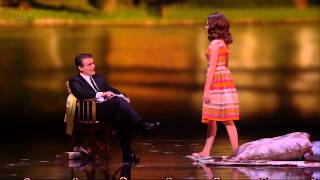 In February 2012, Webber first revealed in an interview with Chris Evans that he was considering working on a show based on the Profumo Affair. A first reading of the musical was held in London in early 2013, with its first public outing coming in March, with Milos Karadaglic performing the title song from the show on an ITV special Andrew Lloyd Webber: 40 Musical Years. The track was later released as a digital download.

Officially confirmed on 28 June 2013, producers announced that the initial production would play the Aldwych Theatre, with tickets going on sale immediately. The show with a budget of £2.5 million has a book with lyrics by Don Black and Christopher Hampton and is directed by Richard Eyre, with choreography by Stephen Mear, set design by Rob Howell, lighting design by Peter Mumford and sound by Paul Groothuis.

In 2014, the full libretto of the musical was published by Faber and Faber in book form.

Stephen Ward began previews on 3 December 2013, at the Aldwych Theatre, London, before holding its official opening night on 19 December, booking until 1 March.

A West End original cast album, was released on 30 December 2013, featuring nineteen songs. The album released by Decca Records was originally slated for a March 2014 release, but was brought forward due to demand.