Terrorist attack on a beach in the Port el-Kantaoui area of Sousse, Tunisia

The Sousse attacks occurred on 26 June 2015 at the tourist resort at Port El Kantaoui, about 10 kilometres north of the city of Sousse, Tunisia Forty people, mostly tourists, were killed when armed gunmen attacked two hotels. It is the deadliest non-state attack in modern Tunisian history, surpassing the Bardo National Museum attack earlier in the year. At least 40 dead in attacks on 2 hotels in Tunisian coastal resort of Sousse, interior minister says

On 26 June 2015, the Riu Imperial Marhaba Hotel, a five-star property at Port El Kantaoui, a tourist complex situated on the coast about ten kilometres north of Sousse, Tunisia was hosting 565 guests mainly from Western Europe and was occupied at a rate of 77%.[15] Tourists from the hotel as well as from the Soviva Hotel located nearby were on the beach. 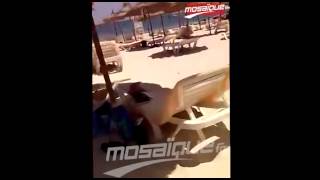 At around noon, 22-year-old Seifeddine Rezgui  (surname varies) from Kairouan, disguised as a tourist, socialized with others, then he took out a Kalashnikov rifle from under a beach umbrella and opened fire on the tourists on the beach.

He entered the hotel, shooting at every individual. He was killed by security forces after an exchange of fire. 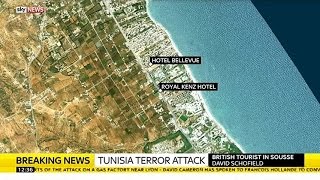 For British nationals currently in Tunisia and wishing to inform the FCO of your whereabouts, or you are concerned about friends or family, you should contact them by: