The Concerto for Group and Orchestra

The Concerto for Group and Orchestra is a concerto composed by Jon Lord, with lyrics written by Ian Gillan. It was first performed by Deep Purple and The Royal Philharmonic Orchestra conducted by Malcolm Arnold on 24 September 1969 and released on vinyl in December 1969. After the score was lost in 1970, it was performed again in 1999 with a recreated score. 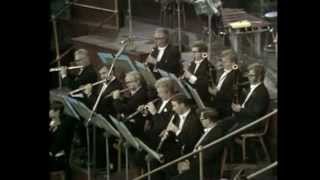 The 1969 performance was among the first combinations of rock music with a full orchestra, and paved the way for other rock/orchestra performances such as Procol Harum Live:

The Concerto for Group and Orchestra is split into three movements.

After an extended orchestral introduction, the group and orchestra work as separate blocks, trying to get dominance over the main theme and working as antagonists to each other. There are cadenzas for electric guitar and clarinet.

This movement is based around two tunes that are played in various different arrangements by the orchestra and the group, individually and together. After a combined pop / blues version of the second tune, there is an organ cadenza followed by a quiet ending by the orchestra.

Apart from Ian Paice's drum solo, the music combines the orchestra and group together in a "free for all". The movement alternates between 6/8 and 2/4 time signatures.

The piece was first performed and recorded on 24 September 1969 in the Royal Albert Hall, London, by:

The Concerto was performed one more time, with the Los Angeles Philharmonic Orchestra conducted by Lawrence Foster at the Hollywood Bowl on 25 August 1970, after which the score was lost.

In an interview for hospital radio in Huddersfield in 1970, shortly after the Royal Albert Hall performance, Arnold provided a positive take on the experience:

What strikes me about Deep Purple is their tremendous musical integrity. This is so refreshing in a commercial world. I loved working with them. They're thorough musicians. They're not trying to prove anything. They just like to play now and again with a Symphony Orchestra. They're not trying to prove any deep philosophical problem. They just want to write music that's enjoyable.

In a 1979 interview with Sounds magazine, Blackmore said:

I was not into classical music then. I was very very moody and just wanted to play very very loudly and jump around a lot. I couldn't believe we were playing with orchestras. We kept getting lumbered playing with them. We started off in '68 – this is my opinion – as a relatively competent band with a lot to say but saying it all at the same time as each other. In '69 we went into the classical stuff because it was Jon Lord's big thing to write a concerto for group and orchestra. He was very sincere, but I didn't like playing it or respect the fact that we were doing it. The orchestra was very condescending towards us, and I didn't like playing with them, so it was one big calamity onstage. But Jon was happy with it and management was happy with it because we had a press angle, which I resented very much.

In 1970 I said, 'right, we're going to make a rock and roll LP. If this doesn't succeed I'll play in orchestras for the rest of my life', because Jon wasn't too into hard rock. Luckily it took off, so I didn't have to play with orchestras any more.

I love orchestras, chamber music—unaccompanied violin is my favourite. But I respected them too much, and we just weren't in the same calibre. I'd been playing 15 years at the time, and stuck next to some dedicated violinist who's been playing for 50 years just to give an angle to the press—it's insulting. That's why it started and ended very abruptly.

On 25 and 26 September 1999, thirty years after its initial performance, the Concerto was again performed in front of a live audience in the Royal Albert Hall. To make this performance possible, a new score was created by Marco de Goeij by listening to the recording and watching the video of the 1969 performance.

The programme consisted of:

On 24 September 2009 Jon Lord joined the RTÉ Concerto Orchestra in the National Concert Hall, Dublin, Ireland to celebrate the 40th anniversary of the first performance of Concerto for Group and Orchestra. Also performed, were pieces from Jon Lord's solo career and a number of Deep Purple songs including an orchestral version of Child In Time.

In October 2012, a studio version of the Concerto for Group and Orchestra was released.

The orchestral parts were recorded at the Philharmonic Hall, Liverpool on 1 and 2 June 2011.

The band parts were recorded in August and October 2011 and also in May 2012. The album was mixed at Abbey Road Studios in late May 2012. According to Paul Mann, Jon Lord heard the final master of the recording a few days before his death on 16 July 2012.