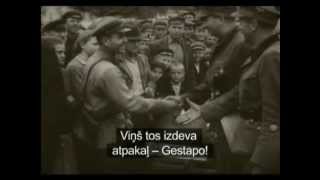 A joint Russian-German parade took place today in Brest-Litovsk celebrating their victory over Poland. Amid huge crowds military divisions of the Red Army and Werhmacht rolled past the Victory Arches decorated with stars and swastikas.

Soviet and German generals were seen paying homage to each other. The parade was intended to display the power of the new Soviet-Nazi alliance. After the parade without undue ceremony, the Germans withdrew to the western bank of the Bug River and the Soviets took control of the city as well as the rest of eastern Poland.