John Denver, was an American singer/songwriter, activist, and humanitarian. After growing up in numerous locations with his military family, Denver began his music career in folk music groups in the late 1960s.

His greatest commercial success was as a solo singer. Throughout his life Denver recorded and released approximately 300 songs, about 200 of which he composed. He performed primarily with an acoustic guitar and sang about his joy in nature, his enthusiasm for music, and relationship trials. Denver's music appeared on a variety of charts including country & western, the Billboard Hot 100, and adult contemporary, in all earning him 12 gold and 4 platinum albums with his signature songs "Sunshine on My Shoulders", 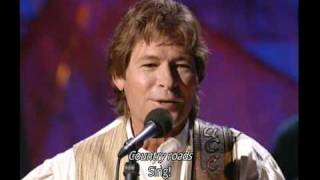 Denver further starred in films and several notable television specials in the 1970s and 1980s. In the following decades he continued to record, but also focused on calling attention to environmental issues, lent his vocal support to space exploration, and testified in front of Congress to protest censorship in music. He is known for his love of the state of Colorado, which he sang about numerous times. He lived in Aspen, Colorado for much of his life, and influenced the governor to name him Poet Laureate of the state in 1974. The Colorado state legislature also adopted "Rocky Mountain High" as one of its state songs in 2007. He was an avid pilot, and died while flying his personal aircraft at the age of 53. Denver was one of the most popular acoustic artists of the 1970s.

Denver became outspoken in politics in the mid-1970s. In 1976, he campaigned for Jimmy Carter, who became a close friend and ally. Denver was a supporter of the Democratic Party and of a number of charitable causes for the environmental movement, the homeless, the poor, the hungry, and the African AIDS crisis. He founded the charitable Windstar Foundation in 1976, to promotesustainable living. His dismay at the Chernobyl disaster led to precedent-setting concerts in parts of communist Asia and Europe.

During the 1980s, Denver was critical of the Ronald Reagan Presidential Administration, but he remained active in his campaign against hunger, for which Reagan awarded Denver the Presidential World Without Hunger Award in 1985. Denver's criticism of the conservative politics of the 1980s was expressed in his autobiographical folk-rock ballad "Let Us Begin (What Are We Making Weapons For)." Denver was also critical of the Republican-dominated Congress and American Conservatism of the 1990s. He denounced the National Rifle Association (NRA) as a corrupt political machine that could buy off politicians, and in an open letter to the media, he wrote that he opposed oil drilling in the Arctic National Wildlife Refuge. Denver had battled to expand the refuge in the 1980s, and he praised President Bill Clinton for his opposition to the proposed drilling. The letter, which he wrote in the midst of the 1996 presidential election, was one of the last he ever wrote.

Denver was also on the Board of Governors of the National Space Society for many years.

He had a few more U.S. Top 30 hits as the 1970s ended, but nothing to match his earlier success. He began to focus more on humanitarian and sustainability causes, focusing extensively onconservation projects. He made public expression of his acquaintances and friendships with ecological-design researchers such as Richard Buckminster Fuller and Amory Lovins, from whom he said he learned much. He also founded two environmental groups; the Windstar Foundation and Plant-It 2020 (originally Plant-It 2000). Denver had a keen interest in solutions to world hunger. He visited Africa during the 1980s to witness first-hand the suffering caused by starvation and to work with African leaders toward solutions.

John Denver testifies before the US Senate, 1985

In 1983 and 1984, Denver hosted the annual Grammy Awards. In the 1983 finale, Denver was joined on stage by folk-music legend Joan Baez with whom he led an all-star version of "Blowin' in the Wind" and Let The Sunshine In, joined by such diverse musical icons as Jennifer Warnes, Donna Summer, and Rick James.

In 1984, Roone Arlidge, president of ABC Sports, asked Denver to compose and sing the theme song for the 1984 Winter Olympics in Sarajevo. Denver worked as both a performer and a skiing commentator (skiing was another avocation of Denver's). He had written "The Gold and Beyond", and sang it for the Olympic Games athletes, as well as local venues including many schools.

In 1985, Denver asked to participate in the singing of "We Are the World" but was turned down. According to Ken Kragen (who helped to produce the song), the reason that John Denver was turned down was that many people felt his image would hurt the credibility of the song as a pop-rock anthem. "I didn't agree" with this assessment, Kragen said, but reluctantly turned Denver down anyway.

For Earth Day 1990, Denver was the on-camera narrator of a well-received environmental TV program, "In Partnership With Earth," with then–EPA Administrator William K. Reilly.

With Denver's innate love of flying he was naturally attracted to NASA and became dedicated to America’s work in outer space. He conscientiously worked to help bring into being the “Citizens in Space” program. Denver received the NASA Public Service Medal, in 1985 for “helping to increase awareness of space exploration by the peoples of the world,” an award usually restricted to spaceflight engineers and designers. Also in 1985, Denver passed NASA’s rigorous physical exam and was in line for a space flight, a finalist for the first citizen’s trip on the Space Shuttle in 1986. He was not chosen. After the Challenger disaster with teacher Christa McAuliffe aboard, John dedicated his song “Flying for Me”, to all astronauts, and he continued to support NASA.

Denver testified before the Senate Labor and Commerce Committee on the topic of censorship during a Parents Music Resource Center hearing in 1985. Denver also toured Russia in 1985. His 11 Soviet Union concerts were the first by any American artist in more than 10 years, and they marked a very important cultural exchange that culminated in an agreement to allow other western artists to perform there. He returned two years later to perform at a benefit concert for the victims of the Chernobyl disaster. In October 1992, John undertook a multiple-city tour of the People's Republic of China. He also released a greatest-hits CD, "Homegrown," to raise money for homeless charities. In 1994, he published his autobiography, Take Me Home. In 1996, he was inducted into the Songwriters Hall of Fame.

In early 1997, Denver filmed an episode for the Nature series, centering on the natural wonders that inspired many of his best-loved songs. The episode contains his last song, "Yellowstone, Coming Home," which he composed while rafting along the Colorado River with his son and young daughter.

In the summer of 1997, Denver recorded a children's train album for Sony Wonder, entitled All Aboard!, produced by long-time friend Roger Nichols. The album consisted of old-fashioned swing, big band, folk, bluegrass, and gospel styles of music woven into a theme of railroad songs. This album won a posthumous Best Musical Album For Children Grammy for Denver, which was his only Grammy.

Denver's first marriage was to Annie Martell of St. Peter, Minnesota. Their wedding was held at the Christ Chapel at Gustavus Adolphus College. Annie was the subject of his hit Annie's Song, which he composed in only ten minutes while on a ski lift in 1974. The couple lived in Edina, Minnesota from 1968 to 1971. Following the success of "Rocky Mountain High," Denver purchased a residence in Colorado and owned one home in Colorado continuously until his death. He and Annie adopted a son, Zachary, and daughter, Anna Kate, who John would say were “meant to be” theirs. John once said, "I'll tell you the best thing about me. I'm some guy's dad; I'm some little gal's dad. When I die, Zachary John and Anna Kate's father, boy, that's enough for me to be remembered by. That's more than enough." Zachary was the subject of "A Baby Just Like You," a song that included the line "Merry Christmas, little Zachary" and which he wrote for Frank Sinatra. Denver and Martell divorced in 1982. She continues to live in Aspen, Colorado.

John Denver married Australian actress, Cassandra Delaney in 1988. They had a daughter, Jesse Belle. They separated in 1991 and divorced in 1993.

Denver's talent extended beyond music. He was a painter as well but because of his limiting schedule, he pursued photography. He once said that "photography is a way to communicate a feeling." Denver was an avid skier and golfer. His love of flying was secondary only to his love for music. He collected vintage biplanes, and in 1974, he bought a Learjet, which he used to fly himself to concerts. He also bought a Christen Eagle aerobatic plane, two Cessna 210 and in 1997, the ill-fated Rutan Long-EZ.

On October 12, 1997, Denver was killed at the age of 53 when his experimental Rutan Long-EZ plane, aircraft registration number N555JD, crashed into the Pacific Ocean near Pacific Grove, California. The National Transportation Safety Board accident ID is LAX98FA008.

A pilot with over 2,700 hours of experience, Denver had single-engine land and sea, multi-engine land, glider, and instrument ratings. He also held a type rating in his Learjet. He had recently purchased the Long-EZ aircraft, and had taken a half-hour checkout flight with the aircraft the day before the accident.The NTSB cited Denver's unfamiliarity with the aircraft and his failure to have the aircraft refueled as causal factors in the accident. Denver was the sole occupant of the aircraft. Before the accident, the Federal Aviation Administration had learned of his failure to abstain entirely fromalcohol after his drunk driving arrests, and since his medical certification was conditional on this, a determination was made that due to his drinking problem, he was not qualified for any class of medical certification at the time. At least a third-class medical certification was required to exercise the privileges of his pilot certificate. However, there was no trace of alcohol or any other drug in Denver's body at autopsy.

This particular aircraft had an unusual reconfiguration of the fuel selector valve handle, which had been moved from the instrument panel to behind the left shoulder of the pilot. Apparently it also had a sticky O-ring and was hard to move. Both factors may have led to Denver pushing the right rudder pedal when he turned to switch fuel tanks by moving the handle. The aircraft then entered an uncontrolled turning descent: a spiral dive or a spin. Flying at an estimated altitude of 500 feet (150 m), he did not have time to recover. As the wreck badly disfigured Denver's head and body, making identification by dental records impossible, records of his fingerprints taken from his arrests for intoxicated driving were used to confirm that the fallen pilot was indeed the singer.

Upon announcement of Denver's death, Colorado governor Roy Romer ordered all state flags to be lowered to half staff in his honor. Funeral services were held at Faith Presbyterian Church in Aurora, Colorado, on October 17, 1997, being officiated by Pastor Les Felker, a retired Air Force chaplain. Later, Denver's ashes were scattered in the Rocky Mountains. Further tributes were made at the following Grammys and Country Music Association Awards. On September 23, 2007, nearly ten years after his death, his brother Ron witnessed the dedication of a plaque placed near the crash-site in Pacific Grove, California, commemorating the singer.