Henry II  was a monarch of the House of Valois who ruled as King of France from 31 March 1547 until his death in 1559. The second son of Francis I, he earlier became Dauphin of France upon the death of his elder brother Francis III, Duke of Brittany, in 1536.

Henry pursued his father's policies in matter of arts, wars and religion. He persevered in the Italian Wars against the House of Habsburg and tried to suppress the Protestant Reformation even as the Huguenots became an increasingly large minority in France during his reign.

The Treaty of Cateau-Cambrésis (1559), which put an end to the Italian Wars, had mixed results: France renounced its claims to territories in Italy, but gained certain other territories, including the Pale of Calais and the Three Bishoprics. France failed to change the balance of power in Europe, as Spain remained the sole dominant power, but it did benefit from the division of the holdings of its ruler, Charles V, and from the weakening of the Holy Roman Empire, which Charles also ruled.

Henry suffered an untimely death in a jousting tournament held to celebrate the Peace of Cateau-Cambrésis at the conclusion of the Eighth Italian War. The king's surgeon, Ambroise Paré, was unable to cure the infected wound inflicted by Gabriel de Montgomery, the captain of his Scottish Guard. He was succeeded in turn by three of his sons, whose ineffective reigns helped to spur the ghastly consequences of the French Wars of Religion between Protestants and Catholics.

Henry as a child

His father was captured at the Battle of Pavia in 1525 by the forces of his sworn enemy, Holy Roman Emperor Charles V, and held prisoner in Spain. To obtain his release, it was agreed that Henry and his older brother be sent to Spain in his place. They remained in captivity for three years.

Henry married Catherine de' Medici, a member of the ruling family of Florence, on 28 October 1533, when they were both fourteen years old. The following year, he became romantically involved with a thirty-five-year-old widow, Diane de Poitiers. They had always been very close: she had publicly embraced him on the day he set off to Spain, and during a jousting tournament, he insisted that his lance carry her ribbon instead of his wife's. Diane became Henry's most trusted confidante and, for the next twenty-five years, wielded considerable influence behind the scenes, even signing royal documents. Extremely confident, mature and intelligent, she left Catherine powerless to intervene. She did, however, insist that Henry sleep with Catherine in order to produce heirs to the throne.

When his elder brother Francis, the Dauphin and Duke of Brittany, died in 1536 after a game of tennis, Henry became heir apparent to the throne. He succeeded his father on his 28th birthday and was crowned King of France on 25 July 1547 at Reims Cathedral.

Henry's reign was marked by wars with Austria and the persecution of Protestants, mainly French Calvinists known as Huguenots. Henry II severely punished them, particularly the ministers, for example by burning at the stake or cutting off their tongues for uttering heresies. Even those only suspected of being Huguenots could be imprisoned.

The Edict of Châteaubriant (27 June 1551) called upon the civil and ecclesiastical courts to detect and punish all heretics and placed severe restrictions on Huguenots, including the loss of one-third of their property to informers, and confiscations. It also strictly regulated publications by prohibiting the sale, importation or printing of any unapproved book. It was during the reign of Henry II that Huguenot attempts at establishing a colony in Brazil were made, with the short-lived formation of France Antarctique. 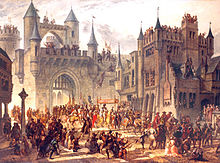 Entrance of Henri II in Metz in 1552, after the signature of the Treaty of Chambord.

The Eighth Italian War of 1551–1559, sometimes known as the Habsburg–Valois War, began when Henry declared war against Holy Roman Emperor Charles V with the intent of recapturing Italy and ensuring French, rather than Habsburg, domination of European affairs. Persecution of Protestants at home did not prevent Henry II from becoming allied with German Protestant princes at the Treaty of Chambord in 1552. Simultaneously, the continuation of his father's Franco-Ottoman alliance allowed Henry II to push for French conquests towards the Rhine while a Franco-Ottoman fleet defended southern France. An early offensive into Lorraine was successful. Henry captured the three episcopal cities of Metz, Toul, and Verdun, and secured them by defeating the Habsburg army at the Battle of Renty in 1554. However the attempted French invasion of Tuscany in 1553 was defeated at the Battle of Marciano.

After the abdication of Charles V in 1556, the Habsburg empire was split between Philip II of Spain and Holy Roman Emperor Ferdinand I. The focus of Henry's conflict with the Hapsburgs shifted to Flanders, where Phillip, in conjunction with Emmanuel Philibert of Savoy, defeated the French at the Battle of St. Quentin (1557). England's entry into the war later that year led to the French capture of Calais, and French armies plundered Spanish possessions in the Low Countries. Henry was nonetheless forced to accept the Peace of Cateau-Cambrésis, in which he renounced any further claims to territories in Italy. 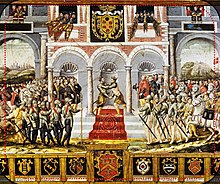 The Peace of Cateau-Cambrésis (1559). Henry II and Philip II of Spain were in reality absent, and the peace was signed by their ambassadors.

The Peace of Cateau-Cambrésis was signed between Henry and Elizabeth I of England on 2 April and between Henry and Philip II of Spain on 3 April 1559 at Le Cateau-Cambrésis. Under its terms, France restored Piedmont and Savoy to the Duke of Savoy, but retained Saluzzo, Calais, and the bishoprics of Metz, Toul, and Verdun. Spain retained Franche-Comté. Emmanuel Philibert, Duke of Savoy, married Margaret of France, Duchess of Berry, the sister of Henry II, and Philip II of Spain married Henry's daughter Elizabeth of Valois.

Henry raised the young Mary, Queen of Scots, at his court, hoping to use her ultimately to establish a dynastic claim to Scotland. On 24 April 1558, Henry's fourteen-year-old son Francis was married to Mary in a union intended to give the future king of France not only the throne of Scotland, but also a claim to the throne of England. Henry had Mary sign secret documents, illegal in Scottish law, that would ensure Valois rule in Scotland even if she died without an heir (Guy 2004:91). Mary's claim to the English throne quickly became an issue when Mary I of England died later in 1558. Henry and his Catholic advisers regarded Elizabeth I unfit to reign because of her supposed illegitimacy as daughter of the executed Queen Anne Boleyn.

Henry II introduced the concept of publishing the description of an invention in the form of a patent. The idea was to require an inventor to disclose his invention in exchange for monopoly rights to the patent. The description is called a patent “specification”. The first patent specification was submitted by the inventor Abel Foullon for "Usaige & Description de l'holmetre" (a type of rangefinder). Publication was delayed until after the patent expired in 1561.

The fatal tournament between Henry II and Montgomery (Lord of "Lorges").

Henry II was an avid hunter and a participant in jousts and tournaments. On 30 June 1559, at the Place des Vosges at the Hôtel des Tournelles, during a match to celebrate the Peace of Cateau-Cambrésis with his longtime enemies, the Habsburgs of Austria, and to celebrate the marriage of his daughter Elisabeth of Valois to King Philip II of Spain, King Henry was mortally wounded by the lance of Gabriel Montgomery, captain of the King's Scottish Guard. Henry suffered a mortal head wound from a lance fragment and, despite the efforts of royal surgeon Ambroise Paré, he died on 10 July 1559 from septicemia. He was buried in a cadaver tomb in Saint Denis Basilica. Henry's death was a factor in the end of jousting as a sport.

As Henry lay dying, Queen Catherine limited access to his bedside and denied his mistress Diane de Poitiers permission to see him, even though he repeatedly asked for her. Following his death, Catherine sent Diane into exile, where she lived in comfort on her own properties until her death.

Tombs of Henry II of France and his wife Catherine de' Medici in Basilica of St Denis, Paris.

It was the practice to enclose the heart of the king in an urn. The Monument to the Heart of Henry II is in the collection of the Louvre, but was originally in the Chapel of Orleans beneath a pyramid. The original bronze urn holding the king's heart was destroyed during the French Revolution and a replica was made in the 19th century. The marble sculpture of the Three Graces holding the urn, executed from a single piece of marble by Germain Pilon, the sculptor to Catherine de' Medici, survives.

Henry was succeeded by his sickly fifteen-year-old son, Francis II. He was married to sixteen-year old Mary Queen of Scots, who had been his childhood friend and fiancée since her arrival at the French court when she was five. Francis II died 18 months later in 1560, and Mary returned to Scotland the following summer. Francis II was succeeded by his ten-year-old brother Charles IX. His mother, Catherine de Medici, acted as Regent. Starting in 1562 and for the forty years following, France was filled with turbulence as Protestants and Catholics fought the bitter French Wars of Religion.

During their marriage, the royal couple faced health problems with their children: their fourth child, Louis, died when he was a baby and Catherine almost died giving birth to her youngest children who were the twins, Joan and Victoria. After their birth the doctors told Henry and Catherine that their marriage should not produce more children.

The following table lists all the children of Henry and Catherine.

Diane, duchesse d'Angoulême (1538–1619). At the age of fourteen, the younger Diane married Orazio Farnese, Duke of Castro, who died young in battle. Her second marriage was to François, Duke of Montmorency.

Henri de Saint-Rémy (1557–1621). He was given the title of Count of Saint-Rémy. One of his last descendants was Jeanne de Valois-Saint-Rémy, Countess de la Motte, famous for her role in the Affair of the Diamond Necklace at the court of Louis XVI.

Nostradamus, a French apothecary and astrological writer known for his prophecies, is often said to have become famous when one of his quatrains was construed as a prediction of the death of King Henry II:

CI, Q 35 The young lion shall overcome the older one, on the field of combat in single battle, He shall pierce his eyes in a golden cage, Two forces one, then he shall die a cruel death.

But, in fact, the link was first proposed in print only in 1614,[18] fifty-five years after the event and forty-eight after Nostradamus' death; thus it qualifies as a postdiction, or vaticinium ex eventu. The Italian astrologer Luca Gaurico, a contemporary of Nostradamus, is also said to have predicted the king's death.