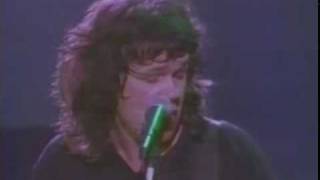 Still Got The Blues (Live)

In a career dating back to the 1960s, Moore played with artists including Phil Lynott and Brian Downey during his teens, leading him to memberships with the Irish bands Skid Row and Thin Lizzy on three separate occasions. Moore shared the stage with such blues and rock luminaries as B.B. King, Albert King,Colosseum II, George Harrison and Greg Lake, as well as having a successful solo career. He guested on a number of albums recorded by high profile musicians, including a cameo appearance playing the lead guitar solo on "She's My Baby" from Traveling Wilburys Vol. 3.

Moore died in his sleep of a heart attack in his hotel room while on holiday in Estepona, Spain, in February 2011.

Moore started performing at a young age, having picked up a battered acoustic guitar at the age of eight. He got his first quality guitar at the age of 14, learning to play the right-handed instrument in the standard way despite being left-handed. He moved to Dublin in 1968 at the age of 16. His early musical influences were artists such as Albert King, Elvis Presley, The Shadows and The Beatles. Later, having seen Jimi Hendrix and John Mayall's Bluesbreakers in his home town of Belfast, his own style was developing into a blues-rock sound that would be the dominant form of his career in music.

Moore's greatest influence in the early days was guitarist Peter Green of Fleetwood Mac who was a mentor to Moore when performing in Dublin. Green's continued influence on Moore was later repaid as a tribute to Green on his 1995 album Blues for Greeny, an album consisting entirely of Green compositions. On this tribute album, Moore played Green's 1959 Les Paul Standard guitar which Green had lent to Moore after leaving Fleetwood Mac. Moore ultimately purchased the guitar, at Green's request, so that "it would have a good home".

While less popular in the US, Moore's work "brought substantial acclaim and commercial success in most other parts of the world – especially in Europe". Throughout his career, Moore was recognised as an influence by many notable guitarists including Vivian Campbell, Patrick Rondat, John Norum, Paul Gilbert, Gus G, Slash,Orianthi, Joe Bonamassa, Adrian Smith, Doug Aldrich, Zakk Wylde, Randy Rhoads, John Sykes and Kirk Hammett

In 1968, aged 16, Moore moved to Dublin to join the group Skid Row with Noel Bridgeman and Brendan "Brush" Shiels. It was with this group that he earned a reputation in the music industry, and his association with Phil Lynott began.

Moore released his first solo album in 1973, Grinding Stone (billed as "the Gary Moore Band"). 'Grinding Stone' was issued in North America on Neil Kempfer-Stocker's fledgling record label imprint Cosmos. It received 'Album of the Year' accolades on KTAC-FM/Seattle-Tacoma, Washington in 1974. In 1978 his solo career continued with help from Phil Lynott. The combination of Moore's blues-based guitar and Lynott's voice produced "Parisienne Walkways", which reached the Top Ten in the UK Singles Chart in April 1979 and the Thin Lizzy album Black Rose: A Rock Legend which reached number two in the UK album chart. Moore appears in the videos for Waiting for an Alibi and Do Anything You Want To.

In 1987, he collaborated on the UK charity record "Let It Be", a cover of the Beatles track. He performed a guitar solo for inclusion on the recording, which was released under the group-name of 'Ferry Aid'. The record raised substantial funds for the survivors of the MS Herald of Free Enterprise disaster.

In 1993, he was included on a cassette called Rock Classics Vol. 1 with "Run to Your Mama", and "Dark Side of the Moog".

After a series of rock records, Moore returned to blues music with Still Got the Blues, with contributions from Albert King, Albert Collins and George Harrison. The album was well received by fans. He stayed with the blues format until 1997 when he returned to the harder rock, but with a softer, more pop and ballad-oriented sound on Dark Days in Paradise followed with another change of direction in 1999, when he decided to experiment with modern dance beats on A Different Beat; this left many fans, as well as the music press, confused. He also contributed guitar sections to Richard Blackwood's 2000 album, You'll Love to Hate This.

At a press conference in Russia, weeks before his death, he announced that he would not visit the "criminal state" of Israel "because of its racist policies against the Palestinian people".

Moore grew up on Castleview Road opposite Stormont's Parliament Buildings, off the Upper Newtownards Road in east Belfast, as one of five children of a promoter named Bobby and housewife, Winnie, but he left the city as a teenager, because all was not well in their household. His parents parted a year later. He left just as The Troubles were starting in Northern Ireland.

Aiming to become a musician he moved to Dublin at the age of 16 and joined Skid Row, a band that then included Phil Lynott. Moore would later join Lynott again in 1973 when he first joined Thin Lizzy, after the departure of founding member Eric Bell and again in 1977. He moved to England in 1970 and remained there, apart from two short periods in America. In 2002 he bought a five-bedroom detached Edwardian house in Hove, just west of Brighton, Sussex, to be near his sons, Jack and Gus, from his former marriage which had lasted from 1985 to 1993. Since 1997 he was living with his partner, an artist named Jo, and their daughter Lily (b. 1999) and Saoirse. His residence was reported to be on Vallance Gardens in Hove, East Sussex.

Gary Moore died of a suspected heart attack, at the age of 58 during the early hours of 6 February 2011. At the time, he was on holiday at the Kempinski Hotel in Estepona, Spain, with his girlfriend, who raised the alarm at 4:00 am. His death was confirmed by Thin Lizzy's manager Adam Parsons. Moore was laid to rest close to Brighton.

Fans have called for popular magazines such as Classic Rock, Guitarist and Total Guitar to do tributes. Twitter was flooded with tributes from fans for several days after the news was revealed.

Moore left an estate worth more than £2 million following his death.