In May 1916 a group of 2,000 prisoners mainly Brittish, were moved from camps in Germany itself to an area now in Latvia, but then part of Russian Empire, occupied by the Germans.

In February 1917 they were moved to different retaliation camps with deliberately harsh conditions, poor accommodation, little food, no food parcels, severe cold weather and long hours of exhausting work in an area close to the Russian front. This was in retaliation for the treatment of German prisoners who were working near the front in France. Those died, were burried in different cemeteries.

36 British soldiers and sailors are buried / reburied in the St. Nicolaus Cemetary, near Jelgava (Mitau that time) most having died whilst in German Prisoner of WWI camps. 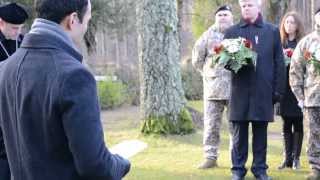 26.10.1918 | WW1. Erich Ludendorff, quartermaster-general of the Imperial German Army, is dismissed by Kaiser Wilhelm II of Germany for refusing to cooperate in peace negotiations