She has sung with artists such as Betty Boo, Dusty Springfield, Claudia Brücken, Julia Fordham, Marilyn, and the bands Pink Floyd and The Beatmasters. She is also a recurring vocalist for Incognito. 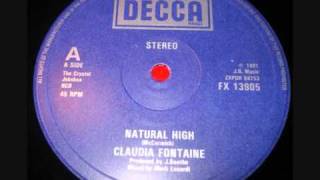 During the 1980s, Fontaine and fellow backing vocalist Caron Wheeler (and later, third member Naomi Thompson) were collectively known as Afrodiziak. She made an appearance in Wheeler's video "Back to Life (However Do You Want Me)" with Soul II Soul. She also performed with such artists as The Jam, Elvis Costello and The Attractions, Madness, Neneh Cherry, The Specials, Heaven 17, Hothouse Flowers and Howard Jones. Fontaine sang background vocals on the hit single "Free Nelson Mandela" by The Special AKA.